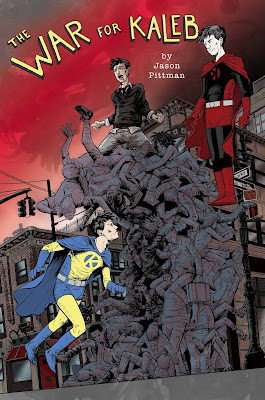 I’ve finished the cover for the graphic novel collection for The War for Kaleb.  I’ve been struggling for a while to figure out exactly what I wanted to do for the cover of the collected edition.  I knew that because this is going to be the final book, with all the bells and whistles going forward once it releases, it needed to be big, and eye catching.  At first I was thinking of typical movie poster format, with all the characters on the cover.  I didn’t like that idea, not necessarily that it had been done before, but mainly that it wouldn’t express what the book was about.  And this has always been the face value dilemma of TWFK: how to express in one image that this is NOT a book about superheroes, but really about a person suffering from an anxiety disorder.

I figured since Kaleb suffers from social anxiety, and particularly from the loss of control he gets from the actions of others, I thought of this idea of a tidal wave of people, similar to the zombies from the World War Z movie.  Kaleb rides atop of the tsunami of people, some that seem aware of the chaos, and others that don’t care, or even doing run of the mill everyday things; i.e. drinking coffee, checking email, taking selfies, etc.  The sky is a blistering red, with the dark Kaleb sitting in the sky commanding control of Kaleb’s emotional state, with the light Kaleb being engulfed by the wave of people crashing down on his head, to extinguish the light Kaleb for good.

I’m hoping that when sitting on a comic book store shelf this image will stand out.  I’ve gotten some good feedback so far, and am feeling good about this image as the cover.  I’m hoping I can get the graphic novel out by the end of the year, or beginning of next, as the final issue is on track to be done end of August-beginning of Sept.

Also this week, I was on a podcast for victimsandvillains.net, where I discuss The War for Kaleb, where I’ve come from as a cartoonist, and a little where I’m heading.  We also talk about a few comic book, and pop culture topics, such as James Gunn’s influence of the Cosmic Marvel Cinematic Universe, and the loss of Adam West.

Victims and Villains a podcast that is dedicated to suicide, and depression awareness, relating to comic books and popculture

You can listen to the podcast clicking HERE.

Posted by Unknown at 1:27 PM No comments: